While globe trotting has a way of adding interesting experiences to one’s life, nothing is more magical than doing it as a couple and making those memories together.

Whether it’s the tourist racing a scooter down the wrong (oncoming) side of a quiet two lane street in Ubud – honking and shaking his fist at a laidback local (who was attempting to dodge him in the same lane) – or the serious Malaysian border official asking us to slowly unpack a suitcase that – thanks to my pastry baker wife – had a precision scale and two kilos of icing sugar in it, having a travel companion to laugh with (or at) always adds to the fun.

Add a toddler into the mix and each experience gets magnified ten times. This goes for the sweet ones, the downright embarrassing ones, as well as the straight up hilarious ones.

Although the following story isn’t all that dramatic, it does give a good example of what’s NOT okay to do in a foreign land (or your own for that matter).

A couple of weeks ago Regina, Olivia and myself flew to Krabi in Southern Thailand for a few days to revisit and reconnect with some people in Krabi Town and to spend a few days at the Ao Nang white sand, turquoise water beaches. 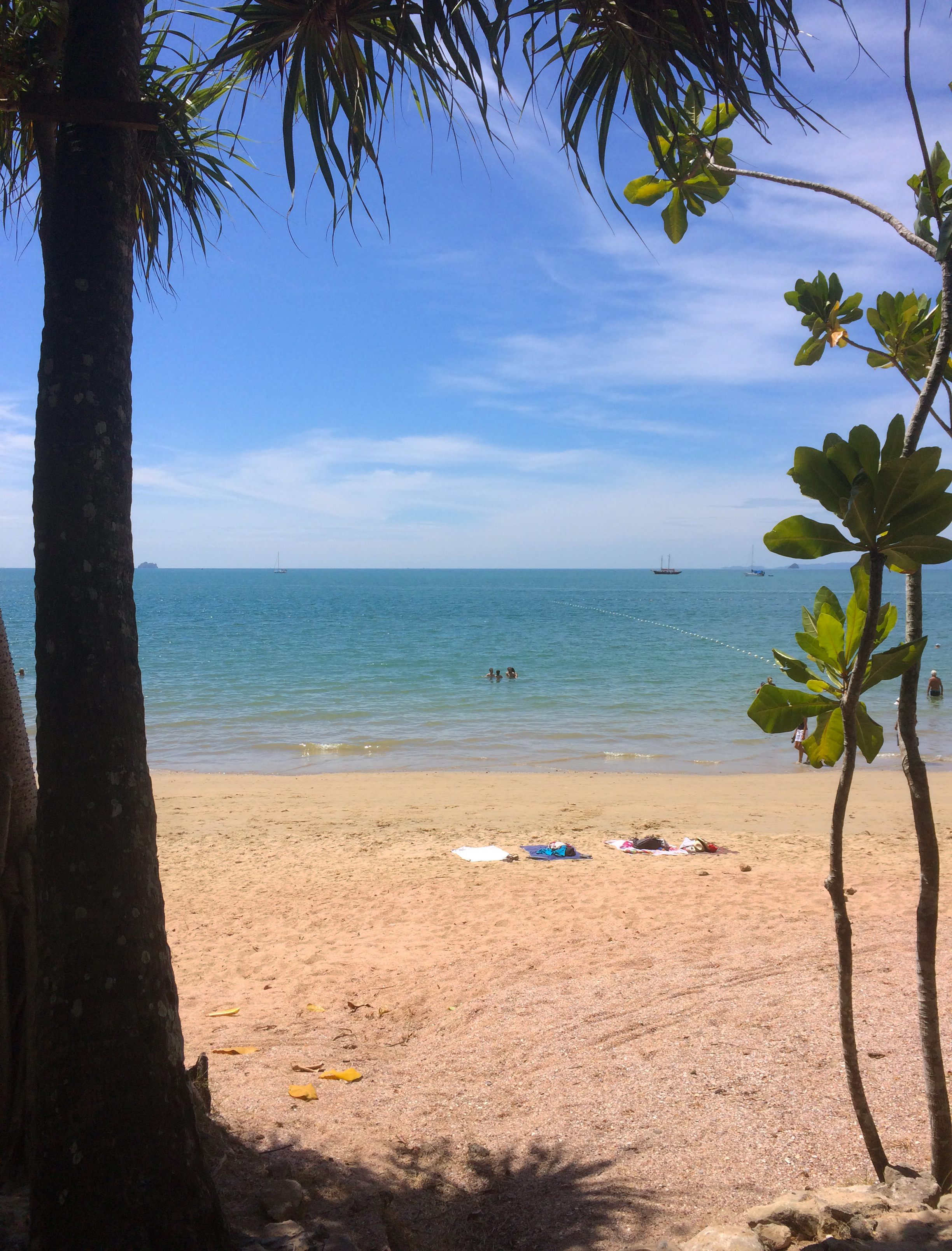 We used to live in Krabi Town back in 2011 and 2012 and – although most people don’t stay long in that fisher town – we decided to spend one night there before moving on to Ao Nang, the more touristy part of the province.

After checking out of our hotel in Krabi town, we jumped on a songthaew (local transit vehicle) like we’d done many times before to make the 30 minute trip to Ao Nang where our next hotel was waiting for us. As always, Regina carried Olivia in a sling while I handled the carry-on suitcase. Not our first rodeo, so not a big deal. Or so we thought. 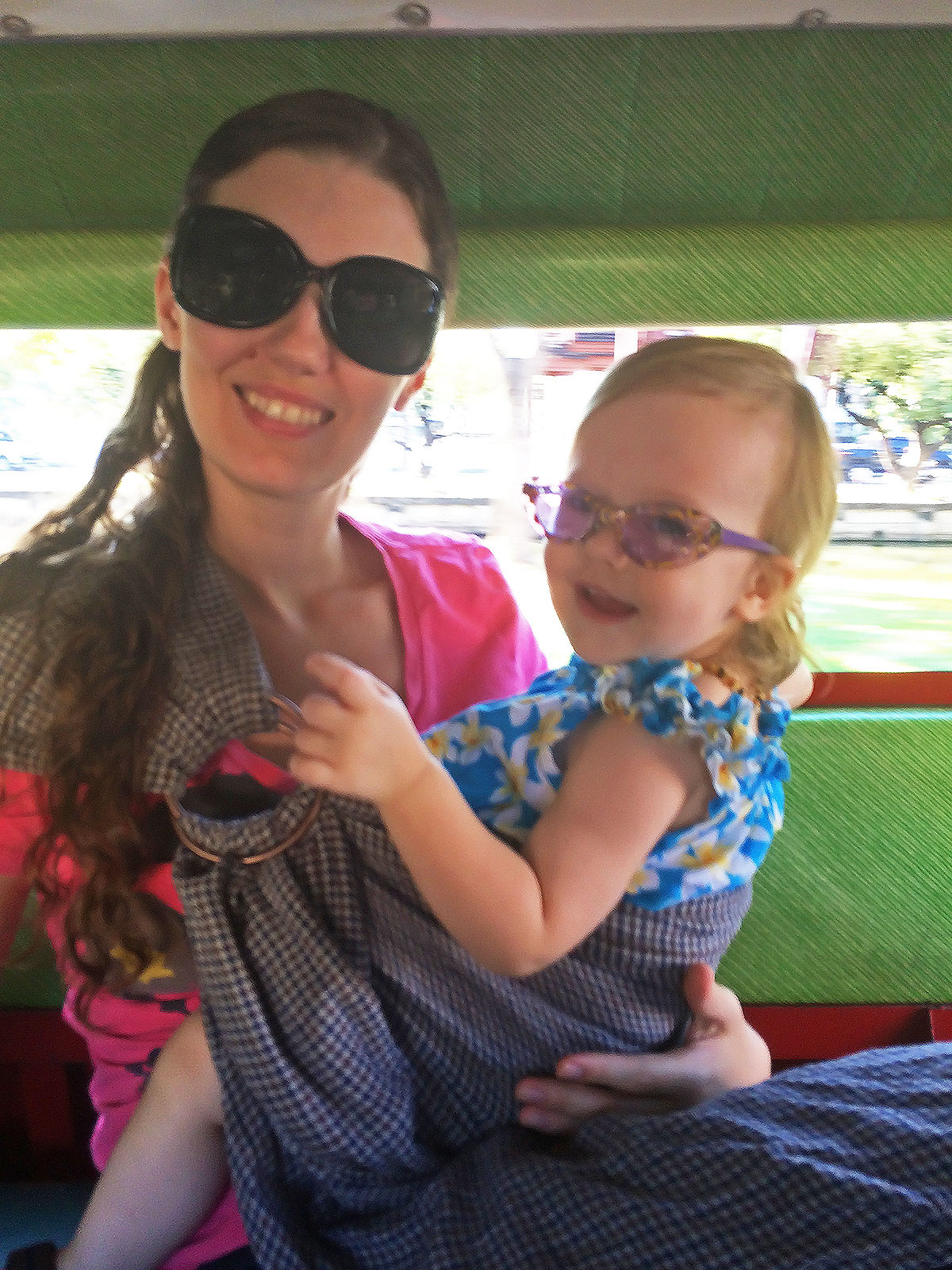 We get on the songthaew and some tourist (older gentleman) says to me while pointing at my carry-on: “You know you’ll have to pay extra for that, right?”

I did not like his tone, but knew he didn’t know what he was talking about. It isn’t your typical suitcase (heck, it’s smaller than a backpacker’s backpack), so I said “I’m not worried about it!”

He didn’t like that. He had thrown me a line with a hook on it, and I wasn’t biting the bait. So he says “You will have to pay for her too!” pointing at Olivia, who was about to fall asleep in Regina’s arms.

I shrugged my shoulders. We’ve never had to pay for her on a songthaew in Thailand. In fact, we’ve found we automatically get better rates when she’s along. We assume it is because “family” is a big thing here.

Either way, assuming I had to pay adult price for Olivia, it would have been an extra $1.50. A buck fifty. I would probably have tipped the driver more than that, so I couldn’t understand why he was even wasting energy on talking about it. It just didn’t make any sense to me, so I let it go.

I wasn’t about to argue with someone who obviously had no idea what he was talking about. Besides, I found him rather rude and “untraveled” from his attitude.

Then, his brother, who had been quiet up until now, turns to his wife on the other side of the vehicle and – with all of us facing each other – starts yapping in German to her.

He obviously didn’t know that Regina and I happen to be fluent in German. In fact, between the two of us we can pick up conversations in a handful of different languages.

He says to her “Mit so kleinen Kindern sind wir nie rumgereist, oder?”
[We never traveled with children this young, did we?]

Her response “Unsere Christina war vielleicht 3 als wir in Schweden waren. Warum? Hast du ein Problem damit?”
[Our Christina was maybe 3 when we went to Sweden. Why? Do you have a problem with it?]

Him “Ja. Wenn die so klein sind, dann weinen die immer!”
[Yes, they always cry when they are this young!]

It get’s silent. Regina and I look at each other smiling. Deep down we find it hard to contain our giggles but decided to sit this one out.

We’re hoping this will be the end of it. But then he continues, and actually said something nice. “Guck mal, die haben nur einen kleinen Koffer zwischen den dreien…”
[Look, they have only one small suitcase between the three of them]

The original German interrupts him and says “Ja, stimmt, die nehmen diesen zum Strand, aber die haben bestimmt noch drei, vier, fünf riesige Koffer im Hotel!”
[True, this is the only one they’re taking to the beach. They have another 3, 4 or 5 huge suitcases at the hotel!]

THIS somehow really bothered me. Having many last minute vacations under our belt, Regina and I pride ourselves in packing super light and being able to make do with one carry-on (tiny suitcase) between the two of us if the stay is less than a week (or a carry-on each if we plan on staying longer).

Traveling with a toddler makes this a little more challenging, but is still doable.

We can still pack up and check out of a Hotel in less than 15 minutes – which is a few hours less than it used to take us (before we had a toddler to chase).

So this geezer finally struck the wrong nerve. I couldn’t hold back any longer and responded “Dieses ist der Einzige. Kaum zu glauben, aber wir haben keine anderen Koffer im Hotel!”
[This is the only one. Hard to believe, but we have no other suitcases in the hotel!]

In shock of realizing we had understood their entire conversation, they responded in unison “der Einzige?” [the only one?]

Yup. It was the only suitcase we had along, and no, it wasn’t a German Koffer. It was a carry-on.

Most people would apologize at this stage for making assumptions, but not these smack talking Germans. What they did though was ask a million questions for the rest of that ride. They were all of a sudden incredibly interested in the family life two of them had just minutes earlier tried hard to find faults in.

Meaning – when abroad – we tend to (largely because we have to) cut older folks a lot more slack than we would younger people.

Turns out though, they had done their share of traveling. In fact, they had been all around the world, and like us, they started young. They started before they had kids and more or less never stopped traveling.

So all around, we were a thirty year younger version of themselves. So why the hate?

After we got off, Regina and I looked at each other and instantly started giggling. What had just happened?

It was a clear reminder for us to never assume someone does not understand us – no matter what foreign language we yap in. It always bothers me when I hear tourists smack talk about locals – assuming they don’t understand them – when I know for a fact that some locals understand a lot more  than they let on.

I’ve heard Thais speak flawless German, Russian, and English. Never assume you’re not being understood. Or better yet – as our mothers used to teach us – if you can’t find anything nice to say, it’s probably best to not say anything at all.