Two years ago I wrote a post about renting motorbikes/scooters in Thailand. Although it’s still a relevant guide to renting bikes in thailand today, I failed to point out a few things that I thought were common sense, but appear to not be with everyone.

So here are Konrad’s 3 Common Sense Rules to renting a scooter in Thailand:

If you have never driven a motorized bike in your life, don’t assume you know what you’re doing. Scooters are easy to ride once you figure them out, but it does take a bit of practice.

The scariest thing you can do is rent a scooter on a main-street rental and then attempt to figure it all out on the busy street. I’ve witnessed more scooter newbies wobble to their crash than I care to remember.

Without fail, every person that came to visit us in Thailand from the west – had it on their agenda to “learn to ride a moped” here. I’m all for it. By all means. But after witnessing our first guest do a faceplant with a scooter they had just rented, Regina and I decided to give everyone a quick 101 with our own scooter beforehand – JUST to make sure they would be somewhat confident when driving away from the rental place.

Again, the small 110cc to 125cc scooters aren’t hard to ride, but ask someone with experience to show you the ropes so you can (hopefully) save yourself the embarrassment of spending the rest of your Thai vacation with scraped up limbs (a common sight among backpackers).

Someone I know recently rented a scooter and – for the first time in his life – started riding it. Not five minutes later he took off too fast while attempting to move the scooter from one gas pump to another – hit a concrete block. This caused him to fall and chip his front teeth, ripped open his jaw (had to be sewn together from inside his mouth with something like 18 stitches), and inflicted all kinds of other (serious) body damage he says he will suffer from for the rest of his life.

He should have had someone do a couple practice runs with him first!

Lastly, be very confident in your own riding skills before you ever attempt to take someone along with you. If you find it hard to balance the scooter when riding it yourself (it’s only an issue when you get going or stopping), you will find it impossible when there is someone on the back of it. Especially if they’re inexperienced bike passengers.

Wear that freaken helmet. I know it is a cheap, scratched up piece of plastic but trust me, it has the potential to save your life.

A few months ago we decided to go for a joy ride around Chiang Mai. While scooting around the outer most parts of the city, we saw a guy waving traffic to go by.

Turns out, some local granny had hit a pothole or something (on the road), lost control of her scooter (likely not even going fast), and – while going down – slid and hit a protruding tree root with her UNPROTECTED head. It was a gruesome aftermath to witness.

In hindsight, I wish I had taken a picture to make a point here, but we continued (slower) with goosebumps all over our bodies. We have no idea if she was still breathing (some locals were attending to her) but what we did know is she appeared to have cracked her skull and was laying in a large pool of her own blood. I had a hard time sleeping that night.

I grew up riding bikes in South America and yes, we never wore helmets. No one did. In hindsight it was plain stupid on our part.

A lot of locals here don’t wear helmets either, especially when they go short stretches (which is likely why that granny never wore one), but don’t be the idiot that makes the same mistake. The helmet does not do you or anyone else any good, when it’s under the seat or in the front basket (as is a common sight).

You may not be aware of this, but roughly 18,000 people (many foreigners) die in Thailand every year because of motorbike accidents. They happen. No one is immune to them. You may be an excellent and experienced rider, but not everyone is. Meaning you can get into accidents that aren’t your fault. So the least you can do is, protect your head.

Here is a picture I took at an unmarked intersection in Chiang Mai, Thailand a few weeks ago. It is the aftermath of a scooter accident. It happened before I got there and everyone was already gone, but the Police paint markings on the pavement suggested it was a two scooter accident (and there was a lot of scooter debris laying around still). 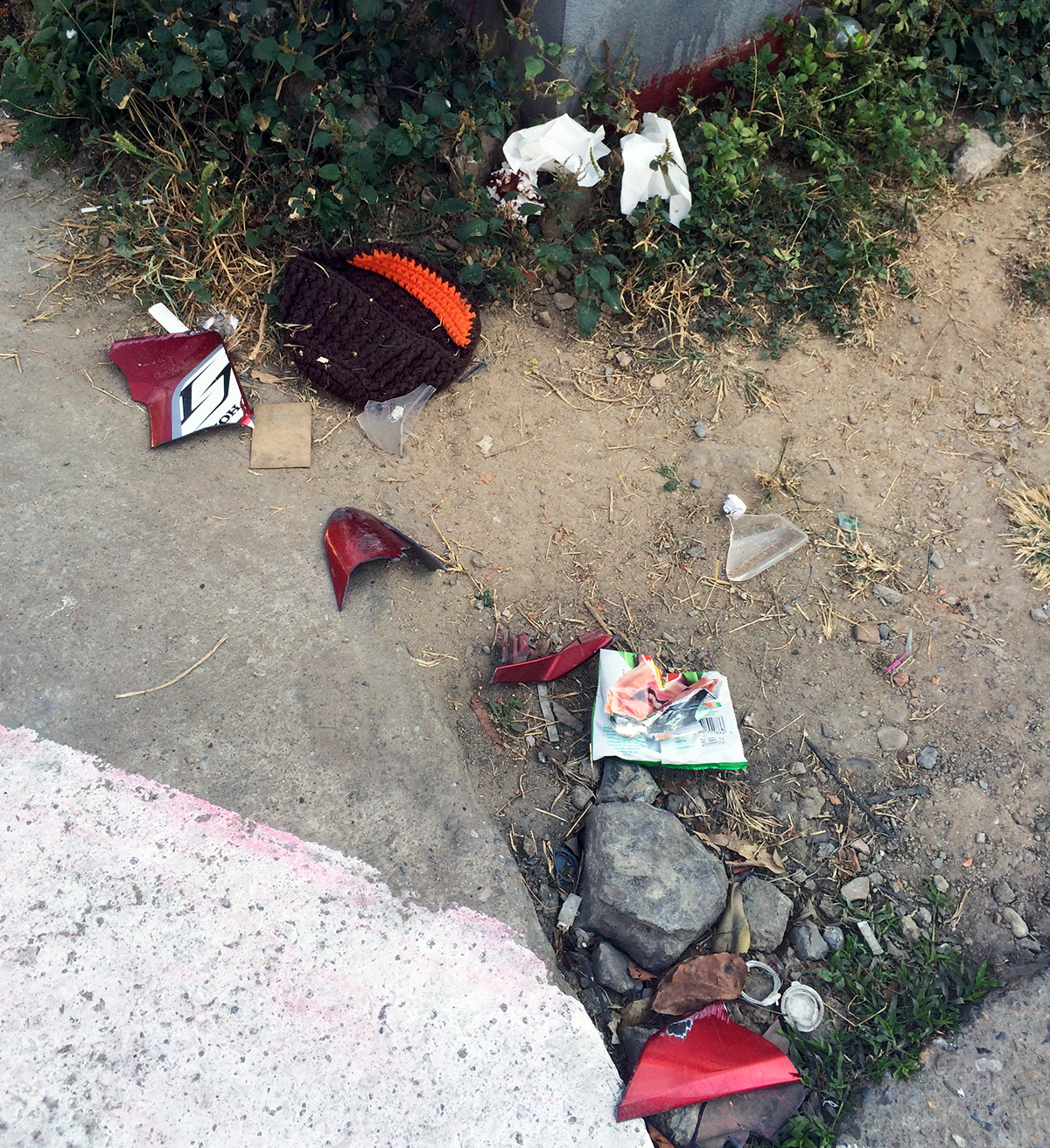 Notice the nice hat that was left behind? Whose ever it was, they should have worn a helmet instead. The crumpled up pile of bloody paper towel (barely visible in picture) says the same. I’m left to assume the individual was rushed to the hospital. Why else would they have left their hat there?

That is just a theory, but fact is: Accidents happen!

Then – a few days after I took that picture – someone asked for type A negative blood donors in a local nomad group on Facebook. Her friend – who had been in a scooter accident here in Chiang Mai – was still in critical condition and badly needed this rare blood.

I don’t believe these last two accidents to be the same, but they could have been. Frankly it doesn’t matter. The point is the same: The very least you can do is wear that freaken helmet. It just may save your life.

I often joke that riders (especially foreigners) who don’t feel the need to wear helmets in Thailand, ain’t got much up there (in their head) worth protecting.

Don’t be that idiot and protect the gray matter between your ears!

Thailand is NOT the wild wild west and scooters certainly aren’t tame ponies. There are rules here and you should follow them or expect to face consequences, just like you would back home.

Things may be very different here from where you live, but remember: You are the foreigner!

I hear of nomads getting pulled over here by Police right left and center for stupid things like not wearing a helmet, not wearing a shirt, having an open beer bottle while riding, etc. All they ever say is “I got targeted because I’m a tourist!”

I just recently heard someone complain how they had been pulled over three times in their first two months in Thailand. TWICE for not wearing a helmet. I said “you asked for it!”

Here’s the kicker: I have been on and off in Thailand since 2011 and have NEVER been pulled over. You could say I got lucky, but I disagree. I never gave cops a reason to pull me over.

Sure, the system is corrupt and sure, the cops are targeting tourists, but if you’re a law abiding rider, they have no reason to stop you. Even if they did, what could they possibly charge you with, if you didn’t break any rules?

Lastly, if you get into an accident with a rented scooter, own up to it. Don’t pretend the scratches were there from before. Don’t make it sound like the rental place is trying to take advantage of you.

To avoid getting taken advantage of (I have never been, for the record… and I have rented scooters all over the country), always take pictures of the 4 sides of the scooter (using your phone) before you ride off. That way – should you get wrongfully accused – you have pictures that prove your innocence.

Have fun. Know the rules and use your common sense, but have fun.

Renting scooters here is very cheap (usually 200 baht or less per day) and yet can be a ton of fun to cruise around with.

Most importantly though, stay safe. Stay safe so you can return for many more Thai vacations and enjoy all the fun this tropical paradise has to offer!

10 thoughts on “3 Rules to Riding Scooters in Thailand”