Having grown up on motorbikes in Bolivia and having owned a scooter in Canada, I welcomed the thought of renting a scooter in Thailand. Sure enough, our first day in Krabitown we seen at least 3 scooter rental places and shortly after decided to go in and rent one. 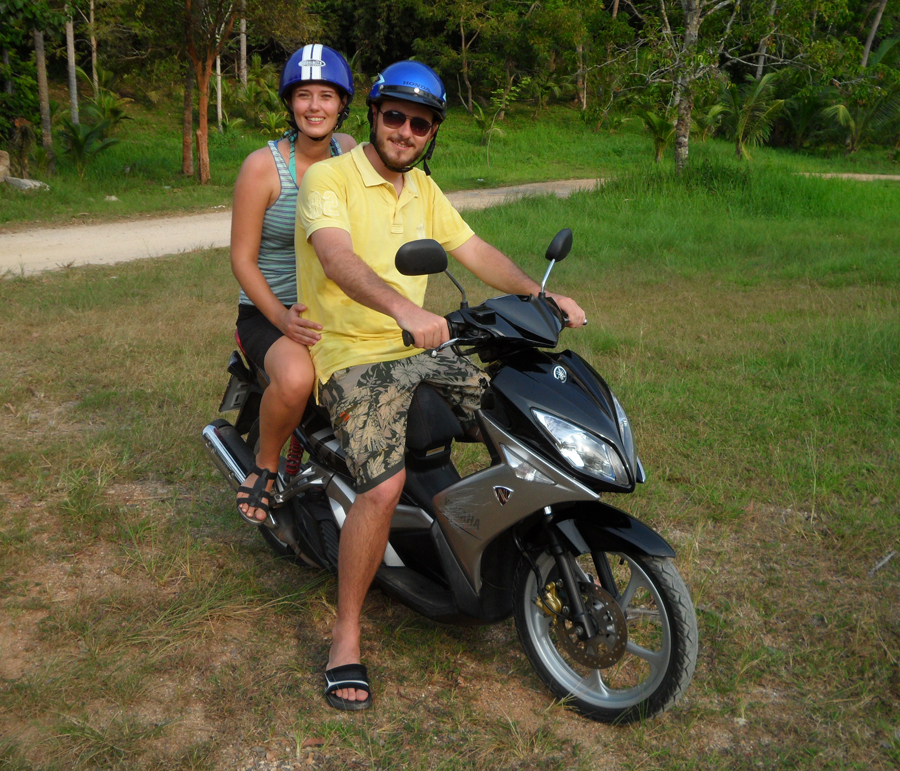 It was very straight forward. You give them your passport, sign a piece of paper that states you will owe them up to 50,000 baht if you get into an accident, pay them for however long you are taking it, and then they hand you the keys along with a worn-out round helmet or two (as needed. The law requires you to wear a helmet there and – as a foreigner – you will be the first to get targeted and fined if you don’t).

I do not have a motorbike license but that was never an issue. I had driven motorbikes and scooters literally thousands of times before so, I knew what I was doing.

Anybody can rent a scooter in Thailand (with a passport and about 150 – 200 Baht per day) but not everyone should. It is very common for complete scooter/motorbike newbies to come to Thailand and get excited at the thought of learning to ride and it sounds like fun, but in reality it is not that great of an idea.

Especially if you come from a country that drives on the right hand side (Thais drive on the left). That alone can get confusing – never mind having to learn to drive still 😀

Case in point: We had 4 scooter newbies visit us while we were in Thailand, and 2 of them ended up dropping it and hurting themselves in the process. Luckily it wasn’t bad (in both cases) and no serious damage was done to either of them or the scooter – but it could have been real bad.

It is quite common to see tourists with badly scraped up body-parts in Thailand. A general conclusion always is
A.) they slipped while rock-climbing, or
B.) they had a scooter accident.

I always feel bad for them – especially when I see them at the beach – because I can only imagine how much those scrape wounds must burn in the salty ocean-water.

There are apparently 38 scooter accident related deaths in Thailand every day.  It sounds like a lot (and it is) but I suppose when you take into consideration that the majority of the traffic in Thailand is scooter based, it is not that surprising.

Either way, better scraped than dead 🙂

My honest opinion is: if you have never driven a scooter, don’t go renting one in Thailand to “learn”. As mentioned before, you will have to do too much learning while driving to also figure out how to drive.

I never had an accident there (thank God) and I ended up leaving Thailand without a scrape, but I will say: Thailand is not the safest country to be riding in. The laws/rules are just so different from what I was used to in Canada.

One thing we noticed in Krabi for example (and this drove us nuts), is that scooters making a left turn would never bother to take a look and see if someone was coming – even when turning from a small road on to a major road. They’d just whip out right in front of you (without looking).

As a result, I (and most scooter drivers) would keep more to the right side of the outside lane where possible.

I also learned to have my left hand hover over the brake (automatic scooters have the rear brake where manual ones have the clutch) – just in case I ever had to slam on it.

Once we got used to riding there though, it wasn’t all that bad and we have done plenty of road-trips with the scooter and never had an issue. It does take some time though before you feel the energy-flow of the traffic.

It was very different from province to province also. Chiang Mai, for example, is a more developed city (and significantly bigger than Krabi) so it has more of a familiar feel to it as well (more by the rules). 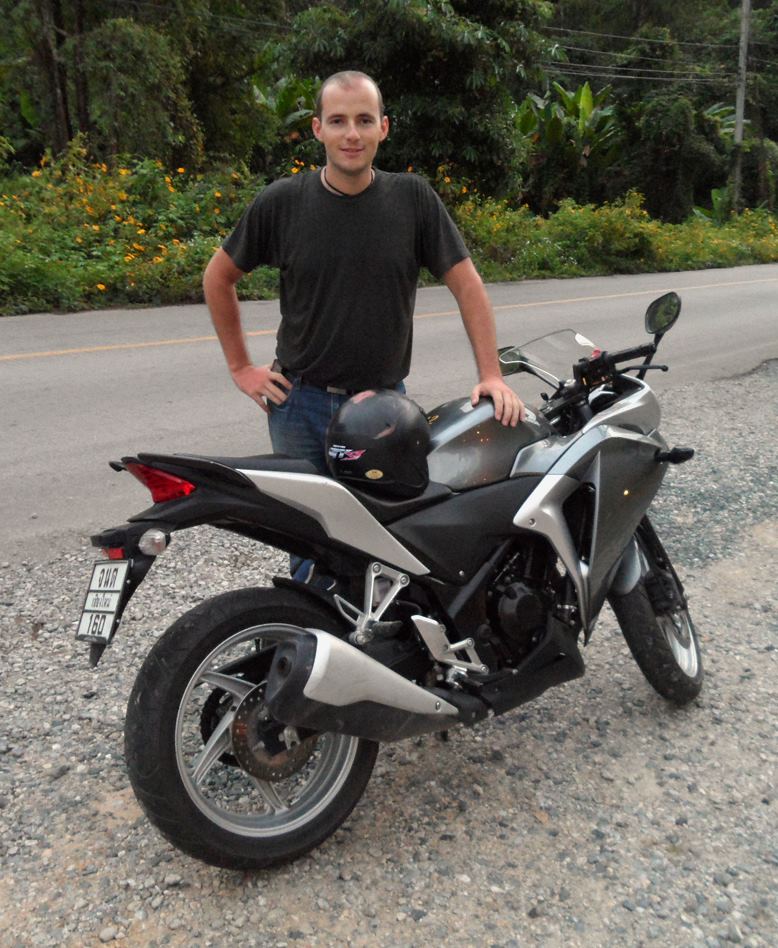 About the picture: We booked a chopper in Chiang Mai to go to Pai one weekend, but come the day we wanted to go and the place we reserved the chopper at was all booked out.

We forgot to take into consideration that it was a major Thai holiday and everyone was out and about – enjoying a good long weekend ride. A long story short, we ended up booking a baby rocket (250cc) and took that instead – and though that had decent power and was a lot of fun to ride, it wasn’t the most comfortable for longer distances.

Just for the record, I believe I spent about 800 Baht to rent that one for a day (plus gas – which was quite a bit more than the 100 baht scooter fill-ups I had gotten used to).

What have been some of your best scooter or motorbike moments in Thailand (or in general)?

17 thoughts on “Renting Scooters/Motorbikes in Thailand”