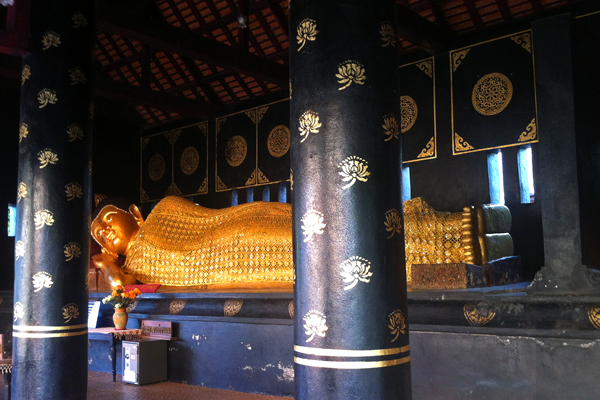 After splurging a couple of months on Bali we returned to Thailand with the plan to rent an apartment for a while. This time we went to the North, Chiang Mai specifically. We had heard and read of other travellers, expats and bloggers living in this laid back Thai city for different lengths of time.

Entering by train at the land border between Malaysia and Thailand we received only a 15 day visa initially. We used the initial 15 days to scope out and get to know Chiang Mai, with the plan to then hop over for a visit to Laos, including obtaining a Thai visa, and return to rent a place to stay in Chiang Mai for longer.

During the first little while we stayed at the lovely Sriphoom House 1. It is in the north-eastern corner within the old city. The rooms are very, very clean with charming dark wood furniture, a/c, fridge, cable TV, LAN and (most of the time) wireless internet, and a little balcony. Like in most Thai bathrooms the toilet gets wet when showering, but this almost doesn’t bother us anymore. The rooms were made up every day that we wanted, and we received new towels and 2 bottles of drinking water. A lot of restaurants, coffee shops, street stalls and market can be reached on foot. And if you wish, you could also stay on a monthly basis.

Around Chiang Mai most Westerners seem to stay in apartments (most often studios, sometimes 1 or 2 bedrooms). Units outside of the old city seem to be cheaper. Most of these apartments have no kitchen, but some have microwaves and almost all will at least have a fridge.

While I sure love cooking, I also love Thai street food. And on top of that, Chiang Mai seems to have coffee shops on every street corner. So we knew we’d be just fine without a kitchen and instead focus more on work and discovering Chiang Mai.

Water and electricity are usually charged according to usage. Often extra charges apply for internet/wifi. Most places add 500-1000 Baht to their advertised monthly rate, if you are renting for less than 3 months.

After reading posts by other bloggers here & here), we got an idea of places others like and we also used online sites like chiangmai.thaiapartments.net to find other complexes.

But nothing beats actually viewing the apartment complexes and available units. Something might look alright on the internet, but reality paints a totally different picture.

We focused solely on the north-western corner of Chiang Mai. Following are places we looked at in no particular order.

On the 2nd and 3rd floor there are fully furnished, bright and spacious units available for daily or monthly rental (serviced apartments). From 7000-8000 Baht a month including weekly cleaning, linen change, wifi. On the 4th to 8th floor there are units for monthly rental with basic furniture, no linen, available from 4500 – 6500 Baht. The complex is still quite new, all the rooms are very clean and bright, there is a gym on the 8th floor and the entire atmosphere is very uplifting.

A lot of expats, travellers and students stay here. It is a large complex with a pool in it’s center. There rates are really low – starting at 3500 Baht. But the rooms we were shown just didn’t invite me. The furniture was old and very (ab)used, the units hadn’t been cleaned and a stale smoke smell was lingering. All in all, the savings wouldn’t have been worth it for me. I need a certain kind of atmosphere to be able to work productively.

Right next to the Chiangmai Lodge this complex was already older, but the rooms were clean, just needed a good venting. The furniture was basic, but included linen, towels, a few dishes, fridge, and microwave. Rates are between 4000-5500 Baht monthly with free wifi.

It seemed more like a hotel, but they also offered monthly rates. It’s a new building with a very calming, inviting atmosphere. There rooms were tastefully furnished, but somewhat small. Maybe it was only that side of the building, but the room seemed rather dark with not much natural lighting coming in. No pool or gym in the complex. Rates started at 9000 Baht/month. I felt, we could get better value at other places.

Konrad was intrigued by the bakery on the bottom offering American breakfast. The building was nice and clean, furniture was basic and seemed rather cheap. Blanket, pillow and sheet could be rented for 500 baht. Smallest room started at 5500 Baht (4500 for 3 months or more). No pool or gym. 650 baht for internet setup seemed higher than most other places, but we were offered a discount for that.

A rather big complex that we noticed while driving by. There were a number of little places offering massages, manicures etc. on the ground level. Rooms were spacious, but furniture was rather old and used already. Not much natural lighting. We were quoted 6000 Baht including wifi and water. No gym/pool.

We were ready to rent one of the serviced units at Chiangmai Lodge (see above) on our return from Laos. But as so often on our travels, plans changed. My sister announced her plan to come visit us over Christmas and as lovely as Chiang Mai is, in my family the beach is a necessary part of a vacation. So at the moment we think we will be in Krabi over Christmas, which doesn’t leave us with even one full month in Chiang Mai and no need for an apartment. A few weeks in a guesthouse it is.

And I am totally looking forward to Christmas by the beach again. However, I have learnt not to hang my heart on any plan too firmly, who knows what might happen and where we will end up.

3 thoughts on “Finding an apartment to rent in Chiang Mai, Thailand”