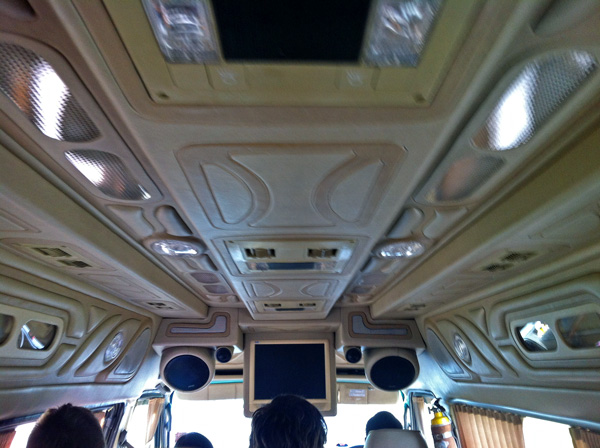 Inside one of the more luxurious mini-vans we have ridden

After we received our new Thai visas from the consulate in Vientiane, we couldn’t wait to get back to Chiang Mai.

So far our experiences traveling via mini-vans in SE Asia has been less than ideal. While it is cheap and fast, there are a number of negative points outweighing these two benefits:

Despite my aversion to this mode of transportation, we ended up booking two tickets from Vientiane to Chiang Mai via mini-van and were in for a surprise. We had already received the visas on Friday, but Konrad got sick again (second time in just 2 weeks in  Laos) so we postponed travels to Saturday…

And might have scored big time because of it.

After being picked up by a van from one travel agency at 5 pm, we were brought to another one just to continue waiting there. By 6 pm maybe, a large pick-up truck with seats in the back picked us up and and many more people (we drove by the first travel agency again…yay for logistics).

Turns out this giant truck was bringing us all to the border (20-30 minutes ride) before we would board our actual vehicle for transport. Most other travelers were en-route to Bangkok. A guide led all of them through the border first and told us, who were Chiang Mai bound (Konrad & I + 1 German backpacker) to wait.

Well, we waited and waited…and waited…maybe half an hour to an hour later another guys shows up, telling us to hurry over the border. Apparently everyone as waiting for US on the Thai side already! Huhh??

The first guide seemed to have forgotten about us. Whatever… quickly we leave Laos. There was a little confusion about whether we had to pay an exit fee or not. The guide told us to pay but none of the Laos official compelled us to do so and no one was checking anything. So we just walked through and ended up not paying anything.

If you know any more information, can you let us know if there is an exit fee for Laos or not at the Vientiane land border? Most websites we looked at had mixed opinions on the matter, some saying they paid, some saying they didn’t. Either way, the “pay exit fee” kiosk was located after we got stamped out of the country so “technically” they could not have charged us anything any more. I don’t know though. Would be great to get some hard facts about this.

Next up is a short ride on a small bus over the Thai-Laos friendship bridge. At the end of the bridge a large bus was waiting for us with all other Bangkok-bound travelers. It was the overnight-express to Bangkok, but it ended up bringing us three to a restaurant parking lot where the mini-van to Chiang Mai was waiting for us.

It was waiting for us and us only. Let me reiterate, Konrad, I and the German backpacker where the only people scheduled to go on this van to Chiang Mai! It was the first time we were on a mini-van that wasn’t filled to the last seat. And it was one of the most comfortable and luxurious vans we ever had.

Large leather seats, that we could recline to our preference without disturbing anyone and there was even room to flip down the front seat and stretch out our legs. It was definitely the best mini-van ride ever. It drove through the night and reached Chiang Mai almost too soon for my taste – at 5 am.

So how did this very unusual journey came to be?

We have two theories and it is probably a little bit of both.

Either the route from Vientiane to Chiang Mai is not a very popular one in this direction, since it goes against the usual backpacker-circuit.

Since the Thai consulate in Vientiane isn’t open on the weekend, no visas/passports where handed out that day. Most visa-runners head back to Thailand as soon as they get their visas, so most likely they all left on Friday already.

Would love more information from others who have gone this route. When did you go (weekday, weekend, time of day/night, etc) and what was your experience like?